Officially invited by Yonsei University in Korea, Tohoku University and

Archie Village in Japan, a delegation from Huizhou University, including

Xu Wanhong, Vice President of Huizhou University, along with 5 administrators

from International Affairs Department, School of Music, School of Physical

Education and School of Foreign Languages, paid an 8-day visit to several

cooperation units in Korea and Japan from November 10th to 17th. 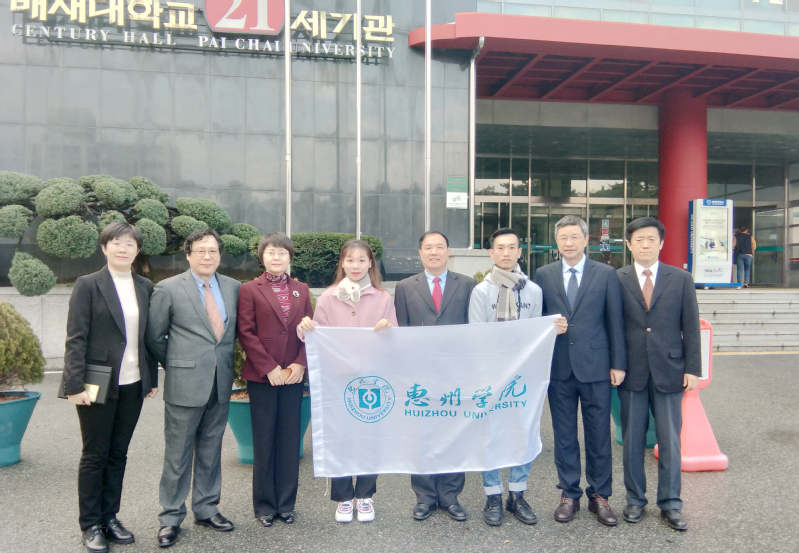 During the visit in Pai Chai University, the delegation was warmly welcomed

by Dr. Cui Haoze, the vice-president and director of Foreign Cooperation

Both sides had an exchange of views on Korean teaching program, short-term

training, on-the-job study for a doctorate for teachers, etc., after which both

sides consistently approved of expand the communication scope and deepen the

level of cooperation. Besides, VP Xu had a short meeting with two Huizhou 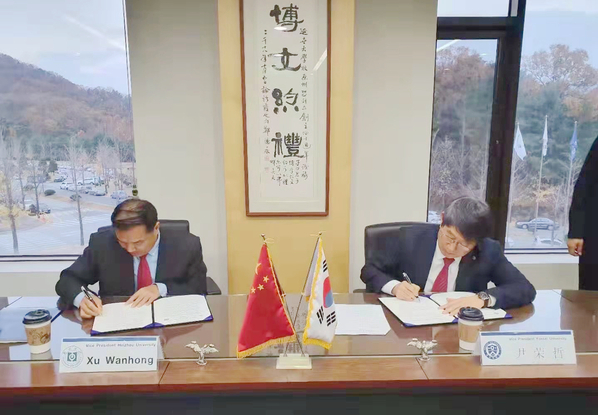 On November 11th, the delegation arrived at Future Campus in Yonsei University

and was warmly welcomed by Prof. Yin Rongzhe, the vice president of Future

Campus, and other deans. President Yin stated that they attached great importance

to communication and cooperation with Chinese universities. Since 1825, the

time when Yonsei University was founded, they’ve set up a series of international

exchange projects. So far, there are over 300 international students in Yonsei

University, of whom more than half are Chinese students. In recent years, Yonsei

is striking to develop digital health care, artificial intelligence and other natural

sciences, and has received key support from the government. In the meantime,

in Northeast Asia, promotes the exchange of language, human history and social

culture with Chinese universities. President Yin also emphasized that they are

anticipating to establish partnership with Huizhou University, and carried out

scientific research. VP Xu briefed the situation and the history of Huizhou

University. Besides, he also gave an introduction of the regional advantages of

Huizhou, especially the prospects of Huizhou in strategic pattern of the Greater

Bay Area, hoping to promote understanding and deepen cooperation of both

joint cultivation, teacher training and other programs at the forum. After the 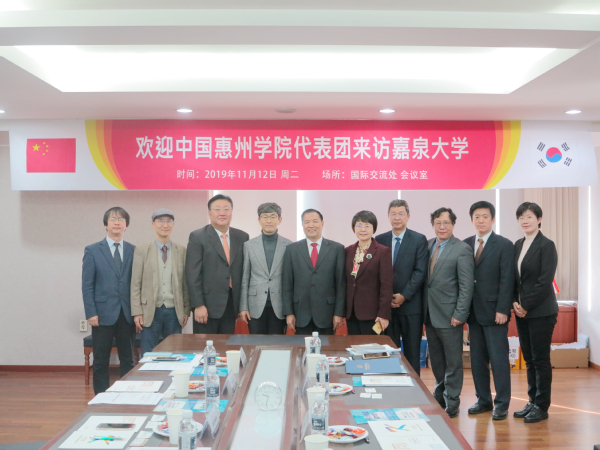 Gachon University, founded in 1939, lays in Chengnan City, south of Seoul, the

by both of the governments of Chengnan City and Huizhou, the delegation of

our university visited Gachon University on November 12th and received a

Department, Dr. Piao Shangyong, the director of Student Department and

culture and director of Asian Culture Institute, and Li Bingjun, the minister of

The two sides carried out a discussion on Korean cooperative teaching, students

and cooperation between the two schools in the field of music and sports,

Besides, hoping to break the languages barriers and the culture obstacles through

music and sports, and to build a friendly and cooperative relationship between the

two universities, our school sent an invitation to Gachon University to send

teacher and student representatives of music, sports, performing arts and other

majors to participate in the second International Cultures Festival of Huizhou

University next year. After the forum, the two universities formally signed the

After visiting Korea, the delegation of HZU went to Sendai, Nagano, Kyoto, Tokyo,

etc in Japan and carried out a friendly visit to Sendai University, Archie Village,

organizations from November 13th to 16th. 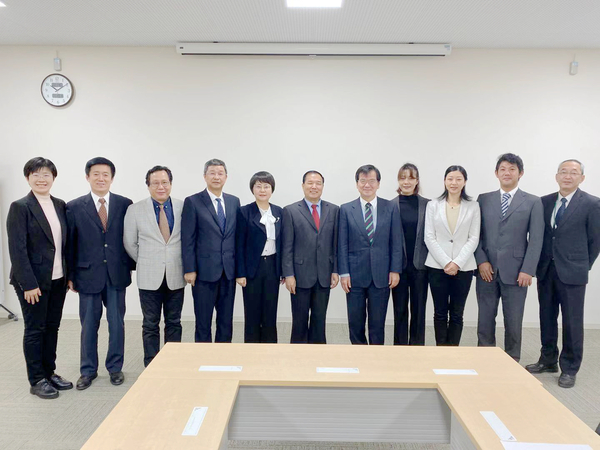 November 13th, the delegation arrived at Sendai University. In the welcoming

gala, the delegation was warm received by Mr. Hozawa Taiji, the legal representative

and chairman of the school, Dr. Endo Yasuo, the president, Sato Shuhei, the

representative of physical education teachers in the Department of Physical

Department. The leaders of Sendai University made an introduction about the

school history, discipline structure and development status of their school,

especially the great achievement in sports field. Apart from that, the leaders

that in this year, for the first time, PE Department of HZU had enrolled 13 freshmen

examination, planning to make them a special class, with the purpose of

cultivating compound talents equipped with both Japanese and sports. Besides,

study for master's degree. After friendly and in-depth discussion, the two sides

joint teaching etc, which lay the brick for further cooperation.

On the morning of November 14th, the delegation visited Institute of Economics of

Kyoto University and had a formal meeting with Prof. Mizobata Satoshi, the director

of the institute, and Dr. Wang Dunyan, the researcher. 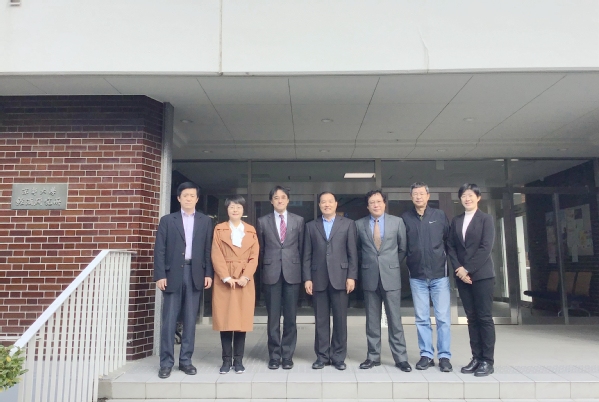 At the forum, the delegation described the basic situation of Huizhou City and

Huizhou University, recalled the history of economic and trade cooperation

between Huizhou and Japan, and briefed the relevant information of Japanese

and cooperation in the future. The delegation also visited the Institute of

and Service Center of Kyoto University.

The third stop in Japan was Archie Village Government in Nagano Prefecture.

In the morning of November 15th, the delegation paid a visit to the Archie

Village Government and received a warm reception from Kumagai Hideki, the 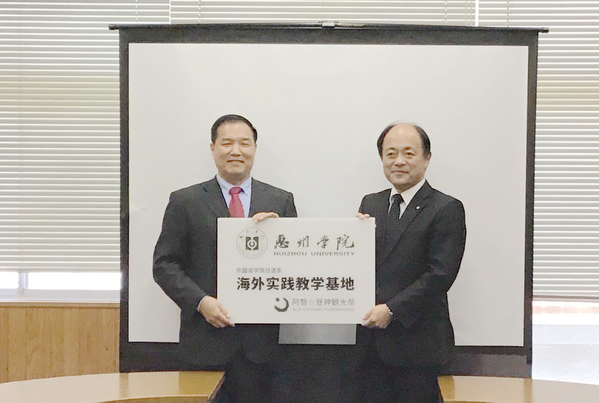 At the forum, there was a licensing ceremony of Overseas Practice Teaching

Base of HZU, which marked the formal establishment of the first overseas practice

teaching base of HZU. After the forum, the delegation warmly visited the students

from our school studying there.  November 16th, the delegation paid a visit to

Yasuo, the director of the third division of Education of TAC Modern Education

Education (Dalian) Co., Ltd. During the forum, the two sides carried out deep

discussion on further strengthening the joint cultivation of compound talents

concerned matters, after which both sides decided unanimously to promote the

impulse to the project. 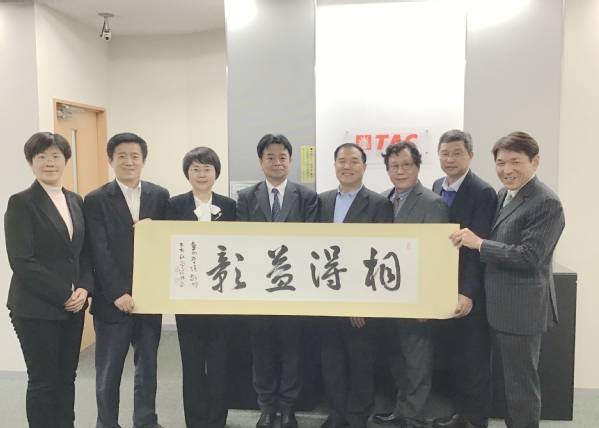 Through all these friendly visits, our university strengthened exchanges and

cooperation with Korean and Japanese universities, local governments, and

of cooperation, laid the foundation of building China-Japanese-Korea Asia Campus,