On the morning of September 4th, the delegation of the Guangzhou office director of NRW. Global Business Liang Jie, the general manager of China Office of Borussia Mönchengladbach Martin Thiess, the project manager of China of Borussia Mönchengladbach Ling Xuan, the director of Sino-European enterprise cooperation center Zheng Yongqiang, the investigator of the Bureau of Foreign Affairs of Huizhou Municipality, and other officials from the People’s Government of Huizhou City visited Huizhou University. Administrators of the International Affairs Department, the Glorious Sun Guangdong School of Fashion, and the School of Physical Education of HZU accompanied the tour and held an informal meeting with the delegation which was hosted by the International Affairs Department.

At the meeting, teachers from the Glorious Sun Guangdong School of Fashion first used PPT and promotional video to introduce the school’s history and current situation, future development, curriculum goals and model, and Industry-University-Research collaboration in Chinese and German bilingually. It was said that the Glorious Sun Guangdong School of Fashion has been promoting international cooperation and has cooperated with several organizations, including the Society of Dyers and Colourists, Clothing Industry Training Authority, and Glorious Sun Enterprises Limited up to now. It has made its contribution to supporting the local economy and talent training through introducing quality industries and educational resources. The administrator of the Glorious Sun Guangdong School of Fashion shared that a German shoemaker would adjust the two vamps’ height to meet the needs of customers with inconvenient legs. The humanization concept would enlighten the new school of Fashion and Creativity which was characterized by shoe bag design. Besides, he was looking forward to establishing communication and cooperation with NRW. Global Business and Borussia Mönchengladbach in the clothing and textile industry.

Then Liang Jie offered some information about North Rhine-Westphalia and its office in Guangzhou. According to Liang’s introduction, bordering Belgium and Netherlands, NRW is the largest German state by population and has always been Germany’s powerhouse with the largest economy among the German states with the most foreign direct investments anywhere in Germany. It is also home to 14 universities and over 50 partly postgraduate colleges, including RWTH Aachen University and the University of Cologne. Up to now, it has established cooperation with China in economics, trade, and scientific research. The industrial ascent of Mönchengladbach of NRW was mainly influenced by the development of the textile industry from the mid-19th to the mid-20th century. Nowadays, it is still famous for its textile-oriented machine industry, owning the textile academy and museum, and the headquarters of Brandt, the enterprise which first introduced Mechanical textile machines from England to continental Europe. To be mentioned, the Hochschule Niederrhein in Lower Rhine has the largest training base for clothing and textile master of engineering in Europe. At last, he hoped the two parties could accelerate cooperation in multiple fields. 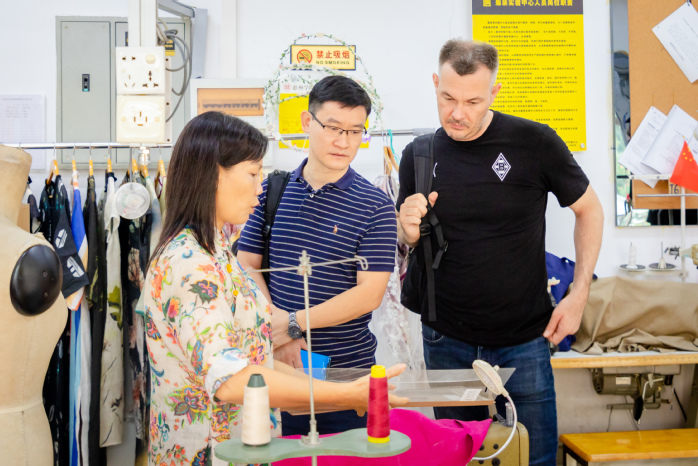 Martin Thiess expressed his gratitude for the warm welcome and pointed out that Mönchengladbach was also well-known for its football team, field hockey, and harness racing games. NRW has five football clubs of the Bundesliga in which Borussia Mönchengladbach was the first team to win the title. He is also expected to promote cooperation with HZU and organize football games together to open communication channels for the further exchange of other sports.

The Glorious Sun Guangdong School of Fashion attaches importance to Industry-University-Research collaboration, which agrees with the German dual education system that combines apprenticeships in a company and vocational education at a vocational school in one course. What’s more, HZU has carried out faculty training, student exchange programs, and other cooperation projects with German universities in recent years. The bright future for the cooperation between HZU and Mönchengladbach is for sure. The two parties will further strengthen relationships and boost cooperation in clothing and textiles, sports and so on to establish a platform for global collaborative education.